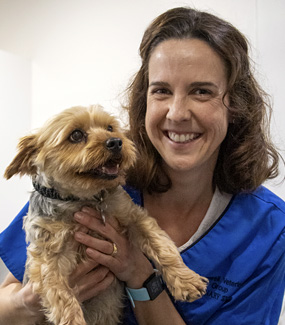 Beckie grew up in Norfolk surrounded by animals. From an early age she wanted to be a veterinary surgeon, with her dream vocation combining a love of animals and puzzles. She was told at school to consider a plan B, but this actually seemed to motivate rather than discourage her! Beckie qualified from Cambridge in 2002 and took her first job in a small local mixed practice. She later moved to a larger hospital based small animal practice in Milton Keynes before joining Cromwells in 2014. She considers herself an all-round GP vet, but especially enjoys internal medicine and emergency work.  Beckie has two Siamese cats and a Labrador retriever. She is a keen musician playing a variety of instruments and different styles of music. She also enjoys distant running, and is a member of a local running club. Her happiest place is exploring the countryside getting lost on the trails.