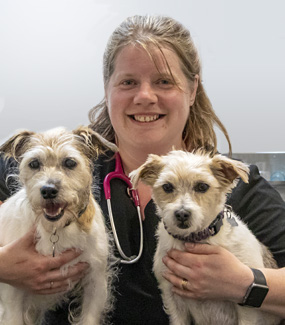 Anne first joined Cromwell's in 1996 as a student veterinary nurse and subsequently qualified in 1999. In 2001 her passion for laboratory work moved her into the forensic science industry. In 2012 Anne re-joined CVG as a night nurse and became Head Nurse in October 2013. She moved into her role as Nursing Manager in April 2016, where she currently manages the largest team in Cromwell's. Anne's love for animals has never stopped whilst away from veterinary nursing, having taken on many stray and needy animals. There is never a dull moment at home with her cats and terriers! Outside of work Anne loves spending time with her family and enjoys crafting, making cards and jewellery.