Late one evening, earlier this month, we looked after a young stray kitten after he had been found stuck inside a car engine. This is his story.

Zoe, a local lady, was relaxing one evening at home and she kept hearing 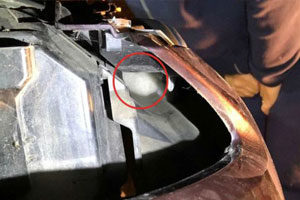 meowing. She didn’t know where the little cries were coming from so she called a family member for help. They soon discovered it was coming her car. In the torch light they followed the meowing, and by removing the wheel and the headlight they finally saw white fluff behind the grille. In a delicate operation, and with much persuasion, they managed to get the little kitten out safely.

Not knowing what to do with such a young kitten, Zoe posted on a local Facebook page looking for his owner. With some help and guidance from other members of the public we were called and one of our nurses Megan Slack drove out at midnight to collect little ‘Sparky’ (as she named him). 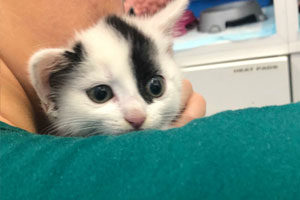 Sparky was given a warm bed, food and water to recover from his ordeal in our hospital. Vet Marta checked him over and was amazed to find he had no injuries. It could have ended very differently – if Zoe hadn’t found him, the car’s hot engine could have burnt him, he could have got stuck in the mechanics or he could have fallen out when the car was moving. If he had managed to get out of the engine himself the danger doesn’t stop there, he was just so young to be on his own. He probably wouldn’t have survived, Zoe definitely saved his life!

What such a young kitten (we estimated him to be around 7 weeks old) was doing out on his own, we do not know. He could have escaped his home through an open window or he could have been cruelly dumped. But we 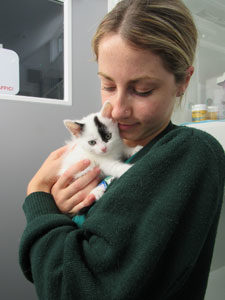 suspect he was a true stray who had got separated from his mum and looking for somewhere warm to curl up, crawled up inside the car engine. A few clues lead us to this conclusion – he was riddled with fleas, had a tick and was quite hissy and spitting at our staff typical of a feral or stray cat.

Whenever we have a stray animal in we try our best to get the word out there to find their owner if they have one. We posted his photo on Facebook and waited. Since Sparky was so little, we thought it best he go to a foster home while we waited the full seven days to see if an owner came forward (the seven day law only applies to dogs but the it is universally used in the pet world for all animals as well). Although we had many offers of a home, no-one came forward claiming to be his original owner.

Throughout his time with us and with his fosterer, Sparky quickly became more confident and started to trust in his carers more. Before long he was playing, climbing and doing everything a kitten of his age should do.

Finding him a home

The next step was to find him a home and for this we felt it was right to pass this big responsibility onto a professional rehoming centre. In little Sparky’s case, the local branch of the RSPCA agreed to care for him. Of course little Sparky didn’t have to wait long, in fact the RSPCA had a waiting list already and he was soon matched up with a new owner.

Update from his new owners 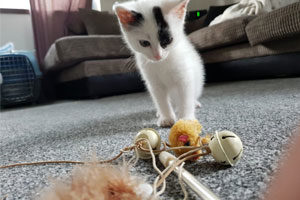 We were thrilled to receive an update from his new owners. They have renamed him “Turbo”, a name he is already living up to! He’s very quickly settled into their home life and even seeking attention and cuddles from his new owners. He’s getting on brilliantly with their other cat too and he’s loving life! Turbo has come a long way from being the frightened little kitten stuck in the engine infested with parasites. We couldn’t be happier with the outcome, thank you to everyone involved in his rescue, care and rehoming!

And thank you to everyone who shared the little kitten’s photo on Facebook when we were looking for his owner, it really means a lot and many times it’s how we reunite pets with their owners. He definitely captured a lot of people’s hearts along the way too with so many people offering him a home and he didn’t just capture your attention – the local media picked up his story too including the BBC! From that we’ve had various national media on the phone asking about little Turbo – he’s become quite a famous little kitten!